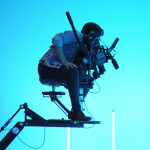 Mauri D.Galiano was born in Madrid, Spain where he started directing music videos in 2010 for independent artists.

His music video works sum up all together more than 400 million views.

He is currently preparing the transition to his true passion, filmmaking.